With our strong, sustained contribution in international research projects, often in a leading role, we help advancing the state of the art in Big Datacube technology, application, and standardization.

H2020 project PARSEC aims to provide SMEs from the Earth Observation (EO) sector and key emerging industries (food, energy, environment) with access to capital, knowledge, market and technology services that will allow them to forge new, cross-sectoral industrial value chains and realise significant, EO-enabled societal, economic and environmental benefits. PARSEC’s goals will be pursued through (i) the introduction of an innovative selection and funding scheme, (ii) the provision of a portfolio of supporting services and (iii) the implementation of three large scale demonstrators (LSD), acting as enablers for the development of new EO-based products/services that bring key benefits to emerging industries. The foundations for PARSEC are provided by existing European assets; Copernicus the European flagship programme and its nascent DIAS (Data and Information Access Service), eoMALL, ESA TEP's and other linked programmes such as the European Open Science Cloud - linking industry and academia.

rasdaman being an accepted industry leader in datacube tools and standardization is contributing to several PARSEC work packages; in particular, the company is leading the PARSEC Big Data Toolbox development building datacubes on the Mundi DIAS, thereby acting as an enabling platform for SMEs to rapidly set up value-adding EO services and business models.

EOSC-hub brings together multiple service providers to create the Hub: a single contact point for European researchers and innovators to discover, access, use and reuse a broad spectrum of resources for advanced data-driven research. For researchers, this will mean a broader access to services supporting their scientific discovery and collaboration across disciplinary and geographical boundaries. The project mobilises providers from the EGI Federation, EUDAT CDI, INDIGO-DataCloud and other major European research infrastructures to deliver a common catalogue of research data, services and software for research.

The vision of the Horizon 2020 project CopHub.AC is to establish a long-term Copernicus hub to consolidate and sustain the Copernicus Academy as a knowledge and innovation platform. To fulfill this several nodes will be created – like a new form of research briefs, knowledge landscape, outreach and sustainability. It will focus and link ongoing R&D activities in Copernicus-relevant academic fields and sustain the innovation process from academia to business on a high scientific and technical level. We have a clear commitment to a full thematic and geographic coverage for a Europe-wide boost in demand-driven uptake of space technology and geospatial information.

The objective of EU H2020 LANDSUPPORT is the construction of a web-based smart geoSpatial Decision Support System (S-DSS), which shall provide a powerful set of tools devoted to (i) support sustainable agriculture/forestry, (ii) evaluate trade-off between land uses (including spatial planning) and (iii) contribute to implementation, impact and delivery of about 20 European land policies and also selected 2030 UN Sustainable Development Goals including climate change resilience goals and the key SDG 15.3 “achieving a land degradation-neutral world”. This objective is achieved by the integration of already existing databases (interoperability) at different scales with the development of high performance modelling engines simulating agriculture & forestry (e.g.crop growth), land degradation and environmental issues (e.g.fate of pollutants, ecosystem services). All the above, including their validation by remote sensed data, will be ensured by a technology at the state of art for the developing environment (i.e. COMPSs), high-performance computing and massive raster data management (rasdaman). LANDSUPPORT will be applied at four geographic scales: EU; 3 Nations (Italy, Hungary, Austria); 2 European Regions in IT and HU; 3 pilot sites in AU, IT, HU; and 2 pilot sites in Tunisia and Malaysia. By doing that, LANDSUPPORT will reconcile grand agriculture/environmental sustainability policy ambitions with operational reality such as the evaluation of "land use trade-offs" and "incentivizing real actions/behaviour/ investments"; all requiring activities at detailed spatial scale.

This project will drive the "ship code to data" paradigm to the extreme: it makes a Cubesat an online Web data service for real time EO acquisition, processing, and retrieval, based on the ISO Array SQL standard under adoption. Images get acquired by the on-board camera and geo-referenced via GPS. Access is done via a high-level array query language allowing ad-hoc processing and filtering on spatio-temporal raster data, similar to what standard SQL accomplishes on tuple sets.

On board, such queries are evaluated by the rasdaman Big Array Data Analytics engine. Among others, it supports spatio-temporal queries, hence is truly multi-dimensional. The configuration can be updated/reconfigured in-flight, although emphasis will be put on automatic optimization, including acquisition planning based on incoming queries. In a direct scenario, targeted subsetting/pocessing of imagery can be downlinked directly to the requesting client, effectively turning the satellite into an image database. In a federated scenario, a client may submit some complex decision support query to a data center; the rasdaman instance there finds out that data are missing and spawns a sub-request to the Cubesat; merges its locally computed results with the Cubesat response into the final result sent back to the user. As rasdaman is already cloud-parallelized, queries can be distributed automatically between ground and space instances.

Overall goal is to achieve a quantum leap in both EO service quality, data availability, and service integration.

This project is supported by German BMBF (Ministry of Education and Research).

The BigDataCube project aims at advancing the innovative datacube paradigm – i.e., analysis-ready spatio-temporal raster data – from the level of a scientific prototype to pre-commercial Earth Observation (EO) services. To this end, the Germany-based, worldwide leading datacube technology (in database lingo: “Array Database”) rasdaman will be installed on CODE-DE as well as in a commercial cloud environment to exemplarily offer analytics services prototypically.

Complementing the Hadoop service already available on CODE-DE rasdaman will offer important additional functionality, in particular a paradigm of "any query, any time, on any size", strictly based on open geo standards and federated with other data centers. On this platform novel, specialized services can be established by third parties in a fast, flexible, and scalable manner.

To this end, several features crucial for operational services need to be tested and/or implemented, such as securing access (in particular in a federation context), optimal operation in a cloud configuration like CODE-DE, support for radar data, and further items to be determined in the initial requirements analysis phase. The result will be the prototype of a federation of rasdaman installations on CODE-DE, CloudEO, as well as the (external) EarthServer federation; further, best practices on the use of array databases in operational environments will be established. This will pave the way for individual value-adding services by third parties.

This project is supported by German BMWi (Ministry of Economy and Energy). 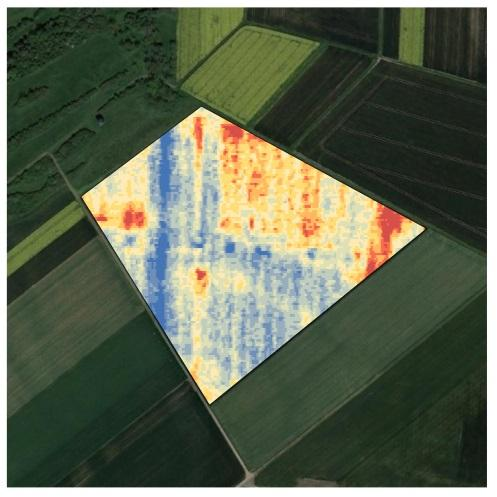 This project has addressed diagnosis in the farm field through Big-Data-based determination of causes for satellite image derived and site-specific variations.

BigPicture has established services to help farmers to optimize returns and to protect the environment through innovative Big Data technology. By interpreting satellite captured variations in farm fields through Big Data technologies targeted measures, such as fertilizer placement, application of plant protection products, or choice of species to grow, can be derived. Manifold information is combined in such analyses, including satellite imagery, weather data, as well as the farmers’ experience. This way, the processing chain from satellite-based symptoms captured in the field over diagnosis up to therapy recommendation can be automated entirely.

Internationally recognized experts have teamed up: Spatial Business Integration GmbH is a specialist in satellite-image based information products for agriculture, rasdaman GmbH is an expert in Big Data services. By combining the complementary know-how of both partners BigPicture has established large-scale automated analysis offering individual insights and support for agricultural production in Germany.

This project has been supported by German BMEL (Ministry of Food and Agriculture).

German standardization body, DIN, has tasked rasdaman GmbH with establishing the next-generation high-level coverage standard, ISO 19123-1 Abstract Coverage Model. Based on the fact that the company already has established the OGC Coverage Implementation Schema, which meantime is adopted by ISO as 19123-2, DIN relies on the unmatched experience of rasdaman GmbH when it comes to coverages and datacubes.

This project is supported by German DIN.

This project is funded by ESA. 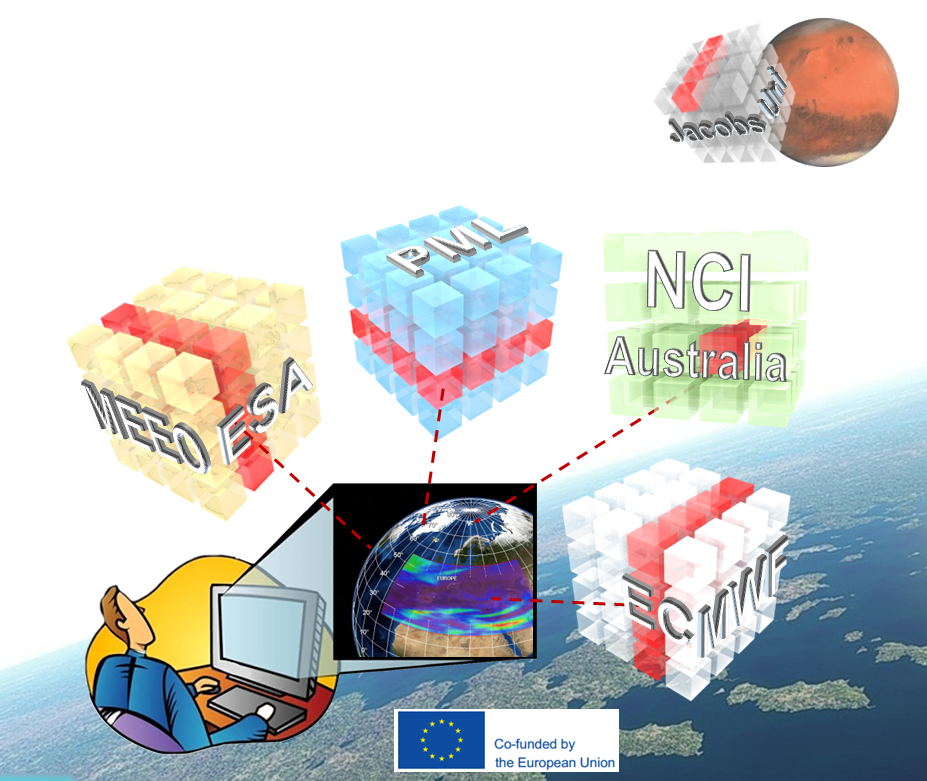 As a followup to the extremely successful EarthServer, the intercontinental EarthServer initiative, funded by EU H2020, makes Agile Analytics on Big Earth Data Cubes of sensor, image, simulation, and statistics data a commodity for non-experts and experts alike.

Large-scale data centers are setting up water, air, weather, and planetary services on 3D and 4D Petabyte-size data cubes with user-tailored clients for both visual and textual queries for ad-hoc mix&match. Being in its second phase, EarthServer maintains and extends the lead in Big Earth Data services established in the highly successful phase 1. Being already supported by ESA, rasdaman is being established as an enabling building block for COPERNICUS / Sentinel.

rasdaman GmbH provides its enabling technology as the EarthServer platform, together with support for the data centers. The rasdaman technology will be advanced in both scalability and functionality. Further, it contributes to standardization and leads exploitation work.

This project is supported by the European Commission / EINFRA under H2020.

ViseoFusion has designed, built and tested a multi-stream geospatial data platform that supports decision-making for operational agencies and critical infrastructure operators. Earth Observation imagery, in-situ datasets and existing web services are integrated, analyzed and visualized in order to provide the end-user with actionable information in either review or near real-time mode

rasdaman GmbH is providing its technology as a backend and information turnpike for various types of high-volume raster data.

EarthServer has established services and technology for open, flexible, scalable, and user-friendly access to spatio-temporal Earth science data. Accessing such data ranges from simple navigation over extraction, download, filtering, and processing up to complex analytics. This is accomplished through versatile ad-hoc analytics suitable for extreme-size multi-dimensional Earth Science data, based on and extending leading-edge Array Database technology.

Several Lighthouse Applications, spanning all Earth sciences, have been established with up to 132 TB databases covering: atmosphere (climate modelling), hydrosphere (oceanography), lithosphere (geology), and cryosphere (snow and ice mapping); in addition, a air-borne science (drone) imagery database has been set up and a Planetary science use case with surface and subsurface data on Mars.

The main innovations of EarthServer are:

Nucleus is the pre-existing rasdaman system which has coined a new research field, Array Databases. During EarthServer, rasdaman has strengthened its position as the world‟s leading Array Database over recent competitors such as SciDB. This substantial technological advance has resulted in a series of awards for Jacobs Uni and rasdaman GmbH, such as winner of the Big Data challenge in the Copernicus Masters competition 2014.

A wide range of outreach activities has accompanied technology development and service de- ployment. Trainings, best practices, and auxiliary software tools have been provided at events and on the Web. A multitude of communication channels have been used to position the EarthServer technology worldwide (such as GEO Plenaries, Copernicus workshops, cli- mate data workshops, standardization meetings). A particular highlight is a 1h TV documentary titled “Big Earth Data – the digitized planet” (Fig. 3) done by Jacobs and rasdaman GmbH one in collaboration with German ZDF and ARTE, to be broadcast soon after the project. While focusing on Earth sciences, this project transcends Earth and Planetary data; rather, Array Databases comprise horizontal platform technology equally game-changing Life sciences, but also industry (such as oil and gas exploration) and eGovernment. In the latter context, during EarthServer INSPIRE has agree to base its Download Services for coverages on the OGC Web Coverage Service (WCS); work will commence in October 2014. To foster such uptake, industry and authorities have been involved in EarthServer.

In TeraPro, a flexible, powerful image processing tool, proStack, has been coupled with a scalable array database backend, rasdaman.